Official Kappa Kappa Gamma histories, directories, songbooks, and publications other than “The Key”. “The Key” has its own section!

First, the story of how I came into possession of this treasure.

I had desperately wanted to add one of these 1930 histories to my collection. However, I had been outbid on each one that I had seen on eBay. In frustration at yet another loss, I headed to Amazon Used Books, hoping to be lucky enough to find one that I could purchase outright rather than risk losing in a bidding war.

As providence would have it, I was in luck. The seller was very honest, as he described the book’s condition in full detail. Marks on the cover. A loose spine. Writing on the pages. The condition was listed as “Fair to Poor”. Sighing to myself, I decided that a history in poor condition was better than no history at all. I made the purchase.

When the history arrived, I opened the package to examine my “fair to poor condition” purchase.

I was barely a few pages in when I saw something that stopped my heart. I stared in disbelief. Upon confirming that I was not, in fact, hallucinating, I remember sinking to the floor in my foyer with my heart pounding.

The “writing on the pages” that the seller mentioned was comprised of many signatures. One of the signatures is that of one of our founders, Mary Louise Bennett Boyd.

I was able to confirm the authenticity of the handwritten signature easily by comparing it to the printed copy of Mary Louise Bennett Boyd’s signature on page V of the history.

I was amazed to discover that the book was filled with signatures of notable Kappas. Further research will hopefully help ascertain at what event this book was signed. 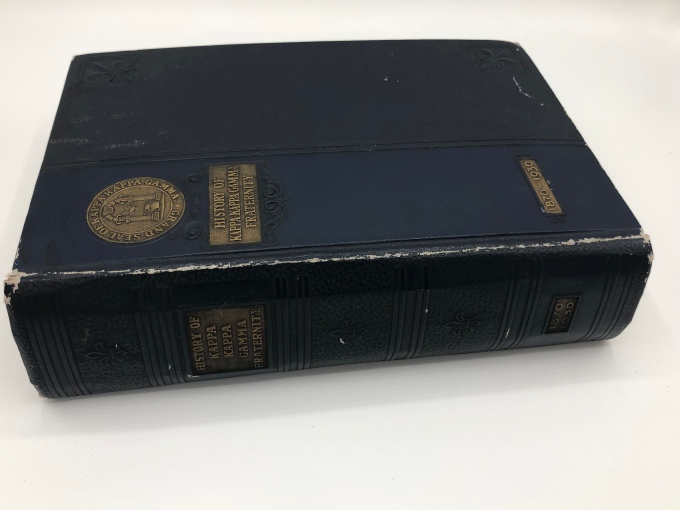 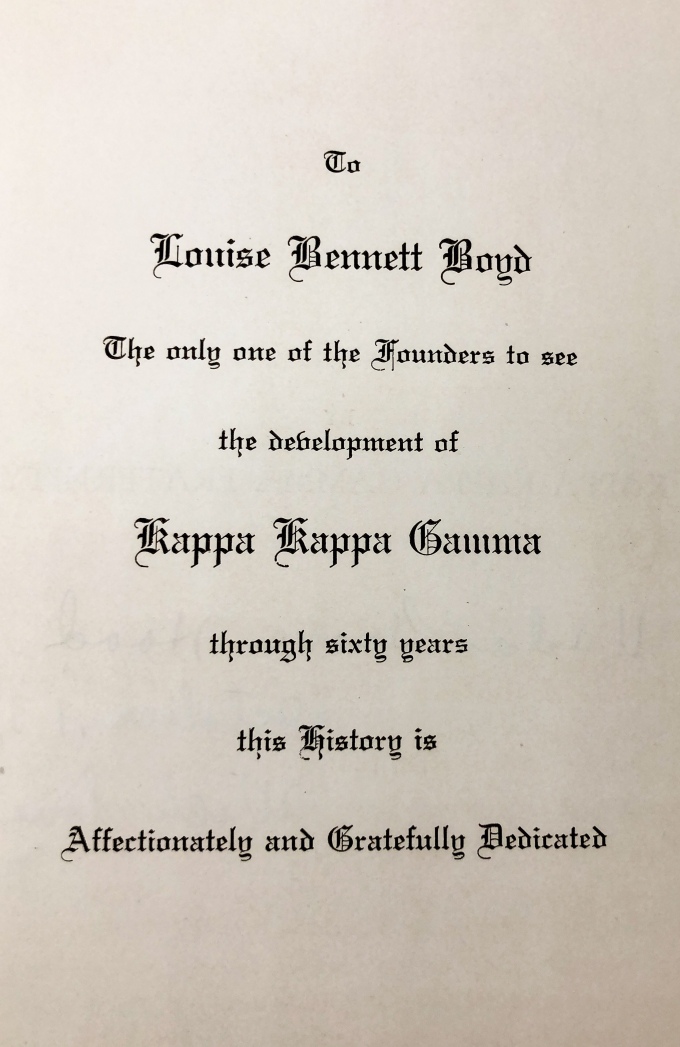 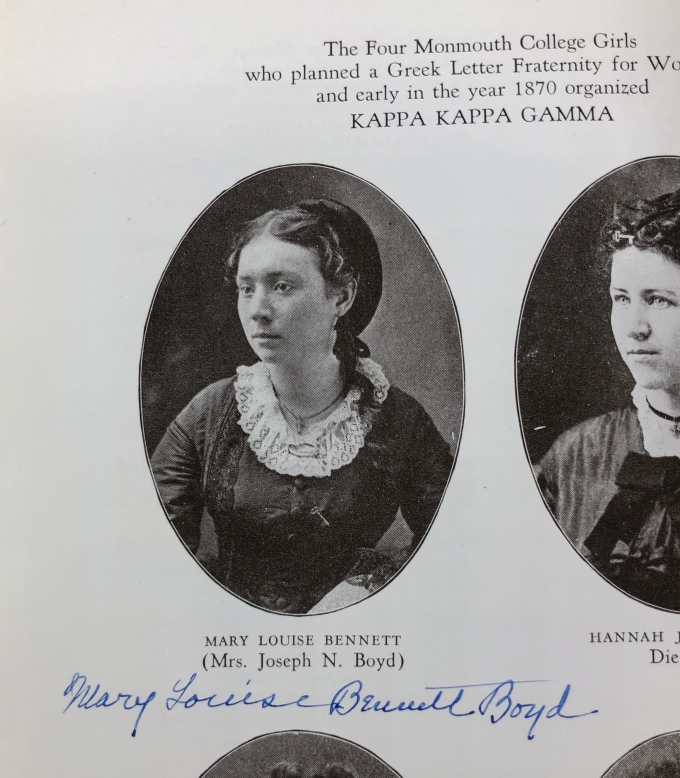 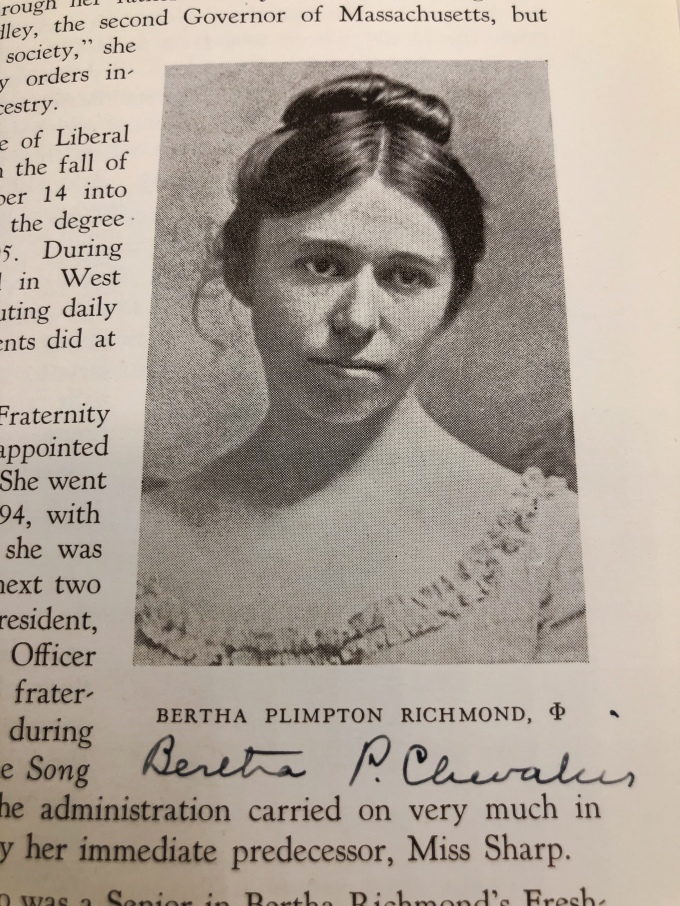 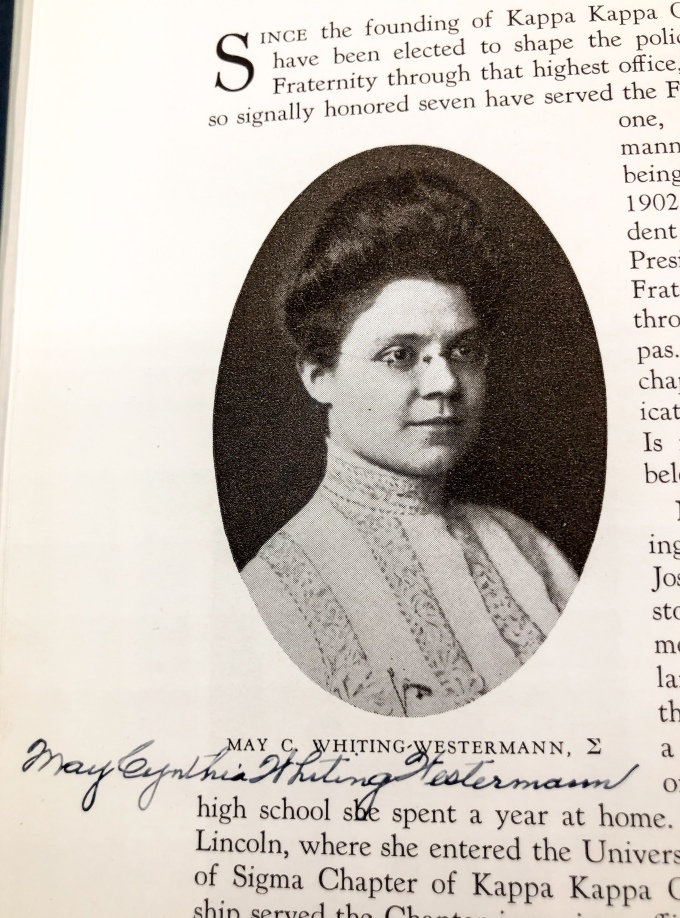 The history was gifted from one Kappa to another and was signed by many other Kappas throughout. 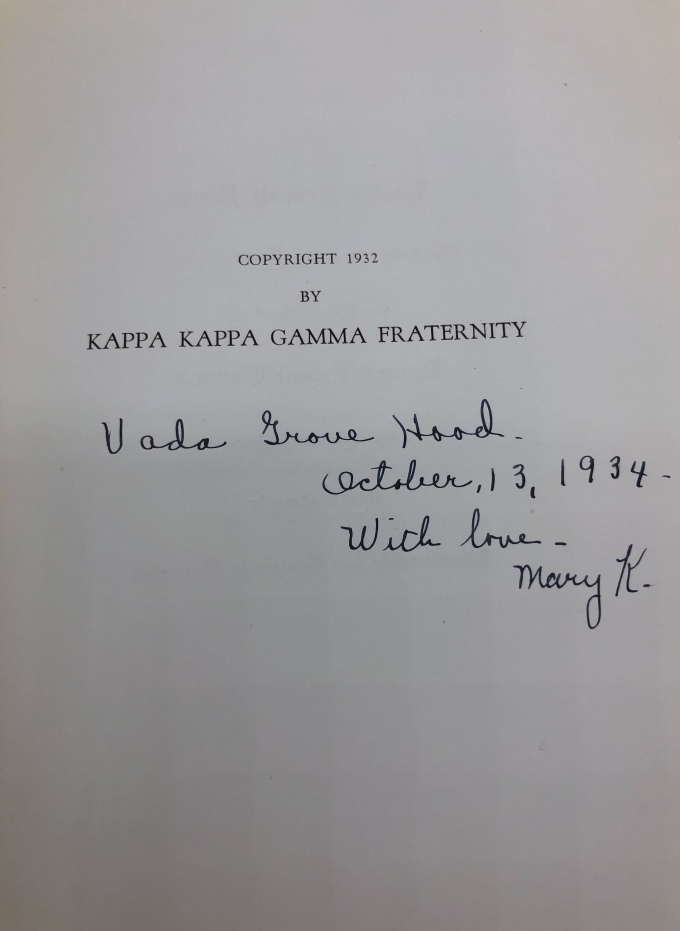 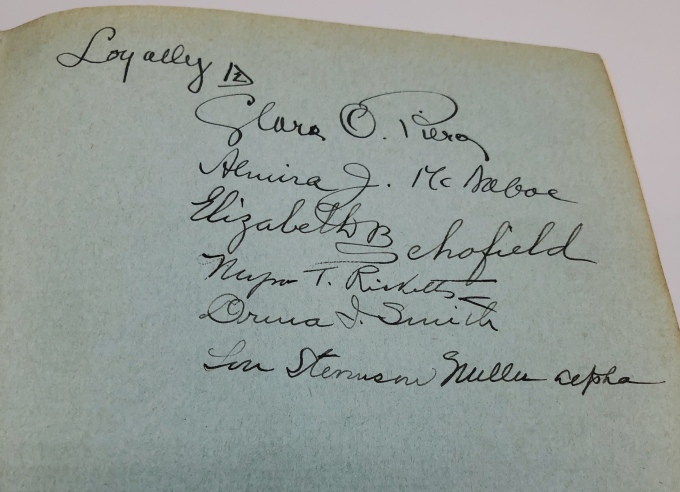 Compiled and edited by the Beta Eta Chapter at Stanford University, this catalogue was published by Kappa’s Grand Council in 1898.

The contents include a preface explaining that “The Grand Council of Kappa Kappa Gamma take pleasure in giving the present catalogue to the fraternity with the hope that it may aid members to perfect the fraternity records, to obtain a better knowledge of the alumnae and to organize alumnae associations.”

This book is absolutely beautiful, and the photos do not do it justice. It is in remarkable shape for its age.

The book was owned by Stella Adelia Vaughn, a Kappa at Indiana University who graduated in 1901. Her married name was Stella Patton (married to William Alexander Patton), and she became a high school teacher in Bluffton, Indiana.

This is a lovely Kappa Kappa Gamma Directory, published in 1913. This book is a complete listing of Kappa membership from 1870-1913. Information in some listings includes address, spouse, and year of death if deceased.

It wouldn’t be a songbook without “Oh, Pat”…

This site uses Akismet to reduce spam. Learn how your comment data is processed.