This section is a fun assortment of party favors, commissioned pieces, items of unknown origin, etc.  If I know a lot about a particular item, I will go into more detail. Otherwise, since this section is going to be quite large, I will focus mostly on showing the items and giving a brief description.

Up first… this lovely vase! This vase was hand made and hand painted by the Weller Husdon Pottery Company specifically for Kappa Kappa Gamma and features a raised iris motif in our colors of blue and blue. It is a delicate 7 inches in height.  The vase is signed by the artist, Sarah Reid McLaughlin, one of Weller’s most popular artists, whose work is highly prized by collectors.

This item is part of an entire line of Weller Ware Pottery pieces commissioned by the Indianapolis Alumnae Association as a fundraiser. This collection was only made between 1928 and 1933. The advertisement seen below appeared in the February 1931 issue of “The Key” and shows this particular style of  vase (No. 42) going for $2.50, approximately $41.00 in today’s money. Given that these vases routinely sell in auction houses for anywhere between $300 and $800 depending on condition, they would have been a decent investment for any Kappa lucky enough to have ordered one in 1931! 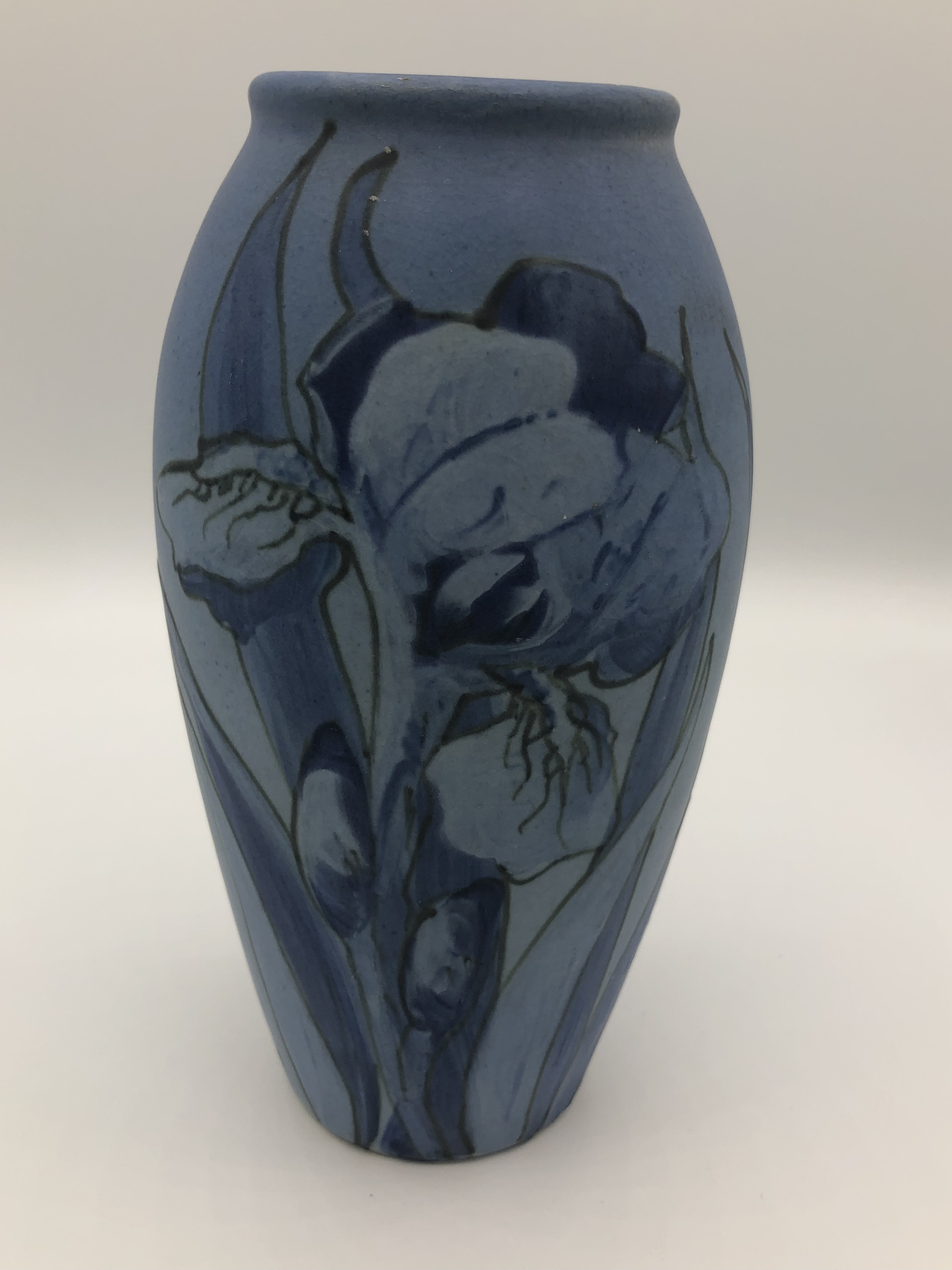 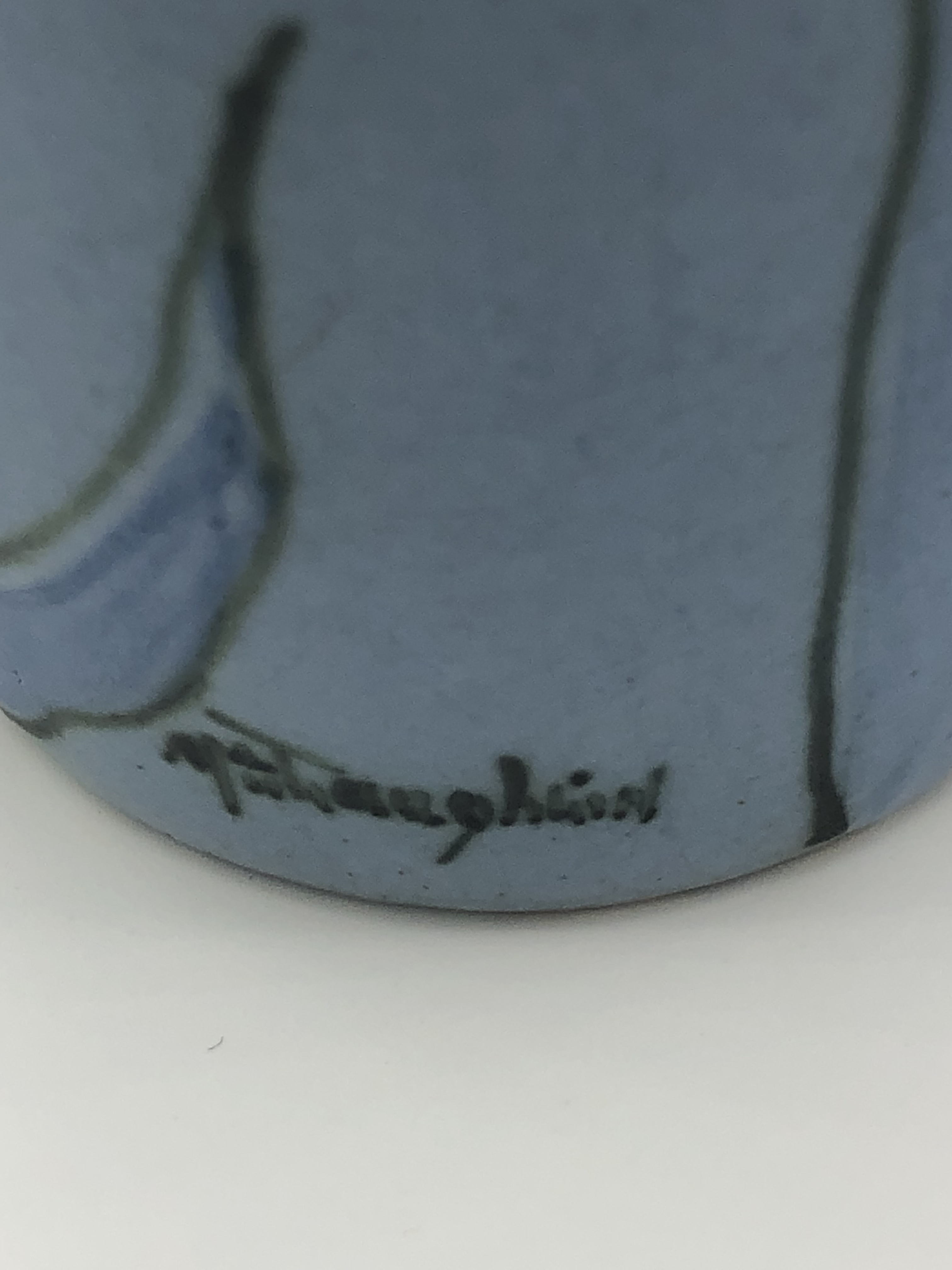 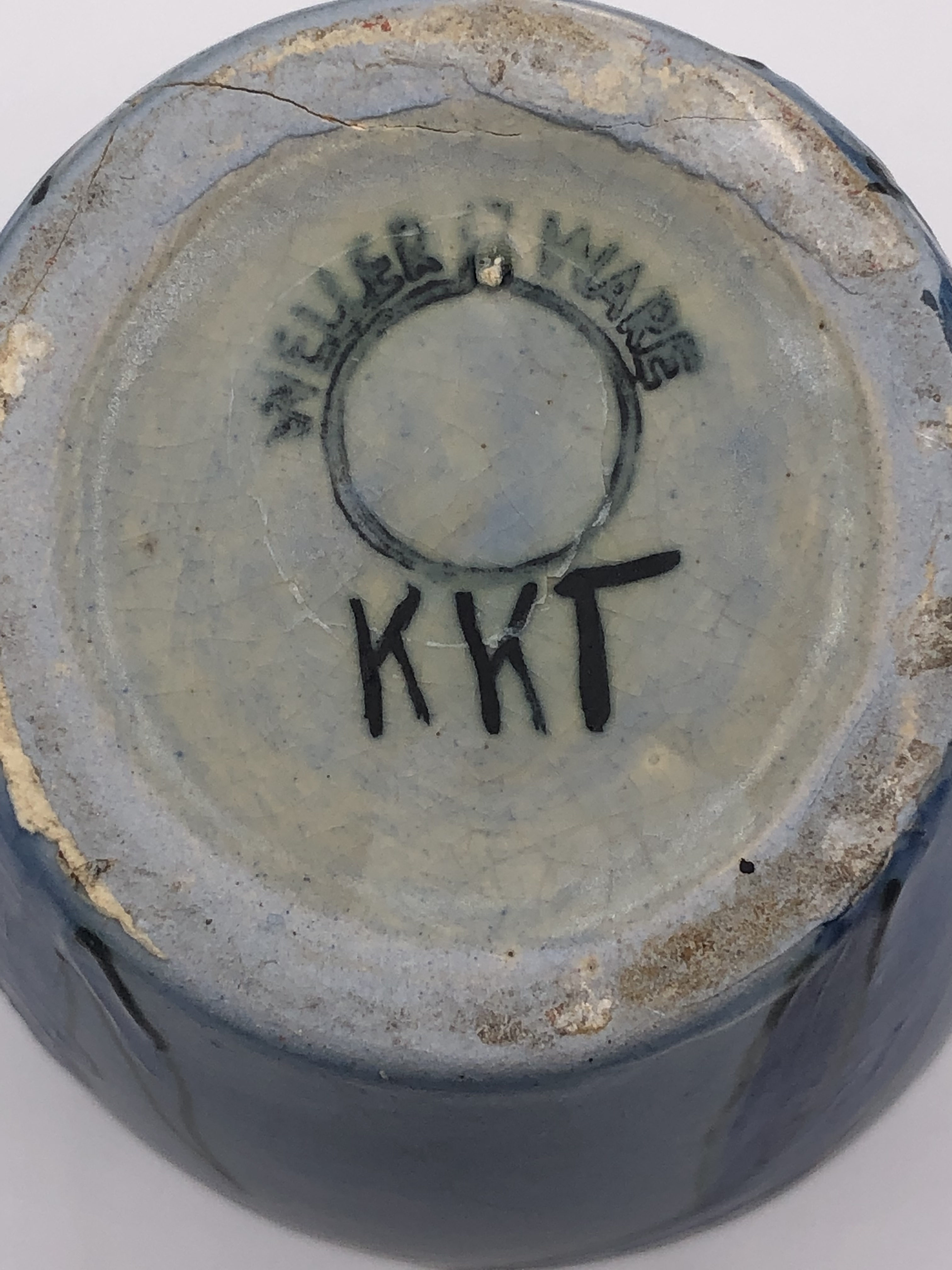 Chester Nicodemus was a well-known Ohio potter who started his Ferro-Stone Ceramics company in 1943, using the mineral-rich red Ohio clay to make his artwork and topping his pieces with his signature style of glazing. He created and sold his pottery from his home studio in Ohio. Upon his death in 1990, at his request, all of his molds and unique glaze recipes were destroyed.  Chester Nicodemus is especially well known for his pottery birds, and his work is highly collectible to this day.  I am not sure how or why he came to make a collegiate line of trinket dishes, but my research found a number of these made for other sororities, fraternities, and universities.

I am unsure of the age of this piece, but research appears to indicate late 1950’s to mid-1960’s. In online searches, these pieces are called either “trinket dishes”, “plaques”, or “ashtrays”. I decided that “trinket dish” had the nicest ring to  it. It is 4-3/4″ in diameter.

The Kappa Symphony is perhaps one of the most beautiful pieces written about Kappa Kappa Gamma. It is a poem that was written by Ella Wallace Wells, member the Beta Tau Chapter of Kappa Kappa Gamma at Syracuse University. Ella sent the poem in a Christmas card to friends and family, and when she passed away soon after, her grief-stricken mother (also a Kappa Kappa Gamma from Syracuse, class of 1885) had prints of the poem made and sold to benefit the Student Aid Fund (precursor to our scholarships program). It was also put to music and is sung during the memorial service at Convention. It was first published with Ella’s obituary in 1909, so it is believed to have been written in 1907 or 1908.

Ella Blakeslee Wallace Wells was born on April 5, 1886, in Tribes Hill, New York. She married Friend Lord Wells on June 15, 1908, in Onondaga, New York, at the age of 22. They had one child during their marriage, a daughter, Eleanor, born on September 8, 1909. Ella tragically died as a young mother shortly after Eleanor’s birth, passing away on October 5, 1909, at the age of only 23.

A dance card was used by a woman to record the names of the gentlemen with whom she intends to dance each successive dance at a formal ball. They appear to have originated in the 18th century, but their use first became widespread in 19th century Vienna. According to the Oxford English Dictionary, the first published use of the term in English was in 1892. The dance card typically had a cover indicating the sponsoring organization of the ball and a decorative cord by which it could be attached to a lady’s wrist or ball gown.

The history of the dance card is actually pretty interesting. You can read more about it here in a fun post at the blog “Uncommon Courtesy” (opens in a new tab for you). https://uncommon-courtesy.com/2013/10/25/dance-cards/

This lovely example of a dance card was for a formal dance held at the Beta Phi Chapter of Kappa Kappa Gamma at the University of Montana.

These beauties are ceremonial owl candlestick holder bookends that were made to commemorate the re-installation of Alpha (Deuteron) chapter on the campus of Monmouth College, the birthplace of Kappa Kappa Gamma.

Fifty years later, on October 13, 1934, the Alpha (Alpha Deuteron) Chapter of Kappa Kappa Gamma was re-installed on the campus of Monmouth College. These bookend candlestick holders were created by Western Stoneware’s Monmouth Pottery line of artware to commemorate the re-installation.

This membership certificate recognizes the initiation of Miss Louise Maude Flower, of Alexandria, Louisiana, into the Beta Omicron Chapter of Kappa Kappa Gamma at Tulane University on October 29, 1906. Given that Louise Maude Flower was born on July 13, 1890, she was only 16 years old at the time of her initiation.

My own Membership Certificate from 1992 is below. There isn’t a whole lot of difference between the two documents considering the 86 years between them.

This tiny program is only 4-1/8 inch by 3-1/8 inch! This National Convention was held at Delta Chapter, otherwise known as Indiana University.

I had a hard time deciding what to call this unusual item. It isn’t a plate or a plaque, so the closest thing I could come up with is “decorative glass disc”. It is very difficult to get a good picture of this item due to it being a bit translucent and very shiny. This cobalt blue glass disc features the Kappa Kappa Gamma crest with the words “Kappa Kappa Gamma Mu Centennial” and the dates “1878” and “1978”. I have not found any information about this item in my research but can assume that it was made to commemorate the 100th birthday of Kappa Kappa Gamma on the campus of Butler University in Indianapolis, Indiana.

This deck of cards has never been opened, and the cards have never been used. The tax stamp on the deck makes it easy to date these cards to 1940. Although these cards are not identical in design to the ones described in the below advertisement from “The Key”, they are close enough that it is reasonable to surmise that these were also produced for the purposes of fundraising.

Monmouth College, the birthplace of the women’s fraternity movement, is in Monmouth, Illinois. The two organizations founded there – Pi Beta Phi in 1867 and Kappa Kappa Gamma in 1870 – are known as the “Monmouth Duo.” Each year on college campuses, the Kappa Kappa Gamma and Pi Beta Phi houses come together for various events. Depending on the campus, these can include date parties or formals, socials, service projects, potluck dinners, luncheons, etc. While I don’t know which campus was celebrating, this item being a carafe would suggest a brunch or luncheon.

Antique Photograph of a Kappa in Her Key, Circa 1895

Lovely old photo of a young woman proudly sporting her Kappa badge where it belongs, on the left side of her chest over her heart. The sleeves of her blouse and her hairstyle date this photo to 1895.

The 1960 National Convention was held in Coronado, California from June 30 through July 5, 1960. After the convention, some Kappas attended a post-convention tour to Hawaii! Their Pan-Am flight with Marsh Tours included custom menus describing the in-flight feast to be enjoyed by the group. Thanks to our wonderful digital archive, I was lucky enough to find a photo of the tour group taken before they boarded their flight from Los Angeles to Hawaii.

Kappas pose on the boarding stairs of a Pan American airplane during the post-convention tour to Hawaii after the 1960 National Convention.

These hand-made sterling silver flower carts were made in the late 1960’s by Cartier, the French luxury goods company best known for high-end jewelry and watches. These specialty pieces were made by Cartier for use as table decorations and were frequently accompanied by a sterling silver flower basket. I am not sure why this particular piece was engraved with the Kappa letters and the year 1975, but guesses would include it being given to a chapter upon the opening of a new house, it being given as a a party favor, or it being awarded as some sort of prize. I wish I knew the exact origins and purpose of this beautiful item. To anyone else other than a Kappa alumna, the engraving would diminish the value of this vintage Cartier piece. However, for a Kappa, it makes it all the more interesting!

As usual, I have trouble getting wonderful photos of shiny, reflective things! But this is an absolutely lovely sterling silver engraved bowl. It reads:

Presented to Josephine Paddock by Kappa Kappa Gamma Fraternity in Recognition of Her Outstanding Achievement, 1946

Josephine Paddock (Beta Epsilon; Barnard College, Columbia University) was honored by Kappa Kappa Gamma for her contributions to the art world. Kappa Kappa Gamma first presented the Alumnae Achievement Awards at the 1946 Convention on Mackinac Island, Michigan, recognizing alumna members for outstanding contributions in their chosen fields. The Alumnae Achievement Award is the highest honor for personal and professional achievement on a national or international level that the Fraternity can bestow upon its members. Josephine was bestowed this honor in 1949.

Josephine was born on April 18, 1885 in New York City. She earned a B.A. degree at Barnard College and studied at the Art Students League with artists Robert Henri, Kenyon Cox, William Merritt Chase, and John Alexander. Josephine exhibited nationally, as well as internationally; including the National Academy of Design, NYC, Art Institute of Chicago, Paris Salon, 1951, Royal Institute of London, Berkshire Museum of Art, Parrish Museum, South Hampton, N. Y. In 1913 at Armory Show in New York City she exhibited two small, sketchy watercolor sketches of swans. Josephine died in 1964 at the age of 78 in her beloved New York City.

Today, the Josephine Paddock Fellowship is the highest award for graduate studies in the arts at Barnard College, Columbia University, in New York City.

This site uses Akismet to reduce spam. Learn how your comment data is processed.